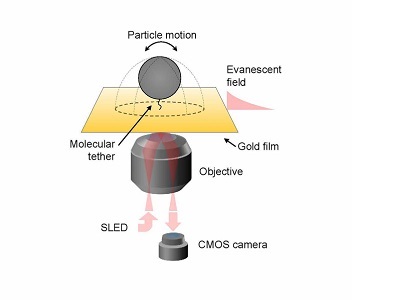 Since its invention more than 400 years ago, the microscope has never stopped evolving, examining ever more deeply the mysteries of nature at the smallest scales.

In new research, Shaopeng Wang, his postdoctoral researcher Guangzhong Ma, and colleagues at the Biodesign Center for Bioelectronics and Biosensors at Arizona State University describe advances in microscopy based on a phenomenon known as surface plasmon resonance (SPR ).

The new study highlights a series of experiments that show how SPR technology can be used to accurately image 100 unique molecules simultaneously and describe their dynamic activities in real time, especially as the molecules bind to each other and fill important biological functions.

“By taking advantage of the extremely high sensitivity in the axial (vertical) direction, the SPR can track the axial movements of the particle with sub-nanometer precision, which is much more precise than conventional microscopic imaging,” Wang explains. . “We have demonstrated that this functionality can be used to study the details of molecular binding events at the single molecule level and also to process multiple signals at once.”

The new study appears in the current issue of the journal ACS sensors and was selected as ACS Editor’s Choice, because of its potential of general public interest.

SPR is an optical effect that can be used to accurately detect and measure the binding of molecules without the need for fluorescent labels. The technique has wide applications, both in industry and in the medical field, where it can be used to screen and develop new pharmaceutical and biotherapeutic drugs, new diagnostic tests, and unlock some of the disease mechanisms.

Many biomolecules critical to health and disease are difficult to observe using conventional techniques such as X-ray crystallography or NMR spectroscopy. SPR offers an efficient and inexpensive alternative for these surveys.

SPR is based on the fact that metals contain many electrons that are not bonded to atoms. When incident light is projected onto these free electrons under appropriate conditions, the energy contained in the light causes these electrons to resonate, producing a wave across the metal surface, known as a surface plasmon.

The SPR technique can be used to measure the binding between proteins, nucleic acids, small molecules and many other interactions. Precise explorations of these biomolecules are difficult, as most are barely a few nanometers in size. The data obtained can help researchers identify which molecules in a sample interact, why they interact, and the strength of those interactions.

SPR is one of the only techniques that allows researchers to study not only the binding affinity of molecules, but also their binding kinetics, providing valuable information not captured by traditional assays such as ELISA. Surface plasmon resonance microscopy (SPRM) takes the basic SPR phenomenon one step further, producing a very versatile technology to study molecular binding events at sub-nanometer scales and with millisecond temporal resolution.

In order to use SPR to gently probe the binding of a single molecule, the receptor molecule, such as a short segment of DNA, is immobilized on a sensor surface made up of a very thin layer of gold. Then the binding molecule is added to an aqueous solution.

When polarized light is directed onto the gold film at just the right angle, plasmon waves are generated. A binding event of the immobilized receptor and the binding molecule can be detected when it changes the refractive index on the surface of gold. This effect works to disrupt the surface plasmon, producing an increase in signal intensity. These fleeting effects are then captured using high-speed cameras.

In the present study, SPR imaging was used to track 100 particles simultaneously in three dimensions. In one experiment, linked segments of double-stranded DNA, 48 base pairs long and attached to a gold surface, acted as receptor molecules. The molecule they were about to detect was a small enzyme known as helicase. Its role in biological systems is to bind to and unwind DNA when DNA sequence repairs are required.

The DNA helicase was first attached to a gold nanoparticle, to allow SPR to reveal its subtle optical properties when it bonded to the captive DNA strand.

With the addition of ATP to the aqueous solution, the helicase got down to its task, unwinding double-stranded DNA at a rate of about 10 base pairs per second, with the live action captured by a camera at 400 fps. The high-precision 3D tracking method described in the study allowed the researchers to derive the rate of unwinding of the DNA strand as well as the angle of rotation of the bound helicase molecule.

Further experiments demonstrate that the method can perform particle-based detection of antibody-antigen binding and distinguish between specific and non-specific binding events. (Nonspecific antibody binding can occur when a cell lacks a receptor or epitope for a specific antibody.) Here, the troponin T molecule, a common biomarker for heart disease, was observed while ‘it bound to its corresponding antibody attached to the gold surface. .

The ability to separate specific from nonspecific binding events is a valuable advantage, as the latter often occur in mixed samples such as serum, making accurate diagnostic analysis difficult.

In addition, since the SPRM technique can capture data on 100 molecules at a time in 3 dimensions, the method allows detailed statistical analysis of molecular binding events and kinetics not possible with conventional methods. Thus, the new technique holds great promise for rapid, inexpensive and detailed detection of biomolecules and can be integrated into a new generation of biodetection devices.

Republished courtesy of Arizona State University. Photo: The graph shows the basic experimental setup for surface plasmon resonance microscopy (SPRM). When a particle of interest binds to a receptor, attached to a thin film of gold, the event disrupts a surface plasmon wave, which is recorded as a change in light intensity. SLED (for Superluminescent Light Emitting Diode) is the light source, which illuminates the sample and induces a surface plasmon wave that ripples across the surface of the gold. A high-speed camera captures these rapid changes, imaging the linkage dynamics. Credit: Adapted with permission from Three-Dimensional Tracking of Tethered Particles for Sonding Nanometer-Scale Single-Molecule Dynamics Using a Plasmonic Microscope Copyright 2021 American Chemical Society.

What it’s like to work with MIG welding of aluminum