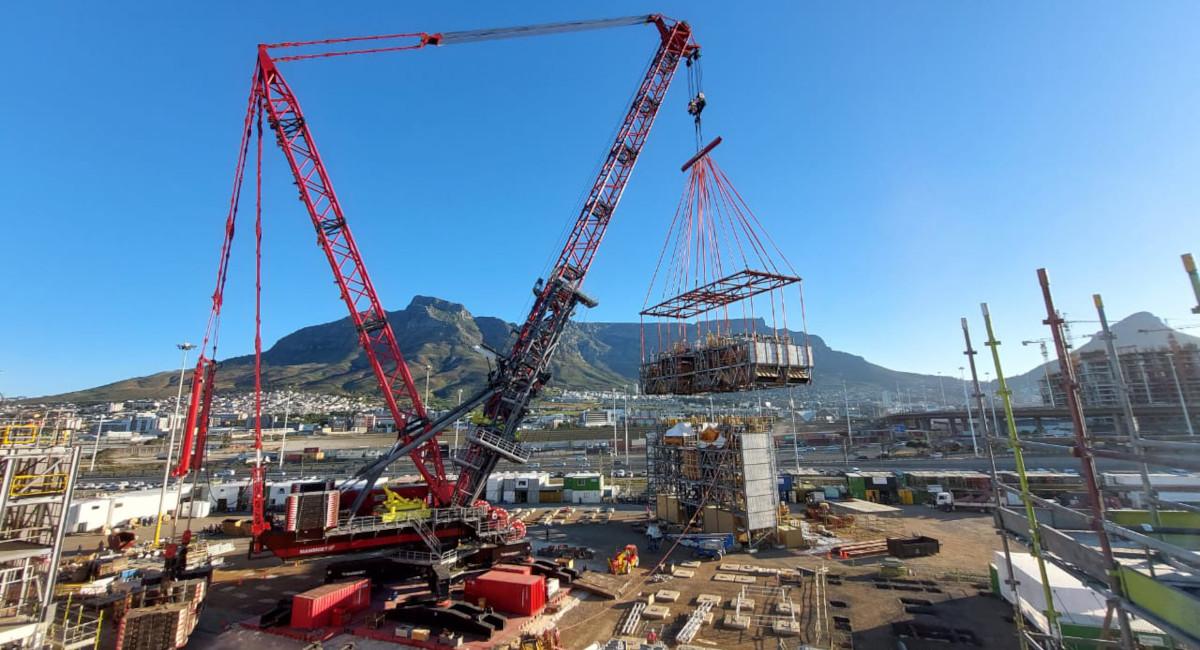 Benguela Gem, (AMV3 project), the largest diamond recovery vessel in the world, will contribute N$3 billion per year to the Namibian economy. Owned and operated by Debmarine Namibia, the vessel is one of the most technologically advanced vessels in the marine diamond industry, valued at over US$420 million.

With its advanced underwater exploration equipment, the vessel can recover high quality diamonds from the seabed in water depths of 90m to 150m. Debmarine Namibia is a 50/50 joint venture between the Government of the Republic of Namibia and De Beers Group, the largest diamond company in the world.

The project was managed for Debmarine Namibia by De Beers Marine in Cape Town. The vessel is a combination of a complex, DP2-capable offshore vessel, fit-for-purpose and integrated with mission equipment. Mission equipment includes the underwater robot that retrieves diamonds and gravels from the seabed, the Launch and Recovery System that deploys the robot to the seabed, and an advanced processing plant that retrieves diamonds from gravels and returns nearly 99% of the gravel to the seabed.

Mammoet, the global heavy lifting and transport specialist, has been commissioned by De Beers Marine to lift and install the ship’s mission equipment modules. To optimize the installation schedule and speed up the integration work, Mammoet engineers proposed its FOCUS30 crane as the best option to install the components, due to its capacity and reach to lift and install all the components on the vessel from a single position.

Erected vertically in sections, the crane requires no laydown area when assembling its jib, meaning less infrastructure to disturb or shut down. Additionally, its low ground pressure – less than 10 t/m² – meant that no special civil engineering work would be required on the quay.

Ten modules weighing up to 428 t were to be integrated into the ship: including lower and upper launch and recovery towers, a winch and a crawler. These main modules were built positioned in a semi-circle, so that they would be within the lifting radius of the crane.

Later, the FOCUS30 was erected among them and was fully ready to lift just over two weeks after its assembly began. Once the vessel arrived for fitting out, the 177 meter vessel was ready for integration. In a three-week operation, Mammoet’s project team skilfully lifted and installed the modules on deck ten days ahead of schedule.

Mammoet’s already established local presence in South Africa meant that its teams and equipment were readily available for the project and ensured that expertise could be provided despite restrictions imposed by the coronavirus pandemic. Daily toolbox briefings were held to provide clear instructions on security and interoperability between Mammoet and the client, ensuring that risk assessments on all site activities were carried out regularly and provided to the client’s management team.

Ewan Labuscagne, Project Manager Mammoet Southern Africa branch, commented: “We are proud to have worked to build the largest diamond recovery vessel in the world using one of the most innovative cranes in the world.

“I am particularly proud of the whole team: the resilience, flexibility and teamwork they have shown, and for having played a role in delivering the project ahead of schedule, despite the challenges of the pandemic,” he added.

The Benguela Gem has set sail off the coast of Namibia, commencing recovery operations which are expected to add an additional 500,000 carats of high quality diamonds to the annual marine diamond production. The ship will also create 160 jobs for Namibian citizens.

NBA Trade Rumours: What’s up on Bradley Beal, Donovan Mitchell for the Sixers?

Stick to Profitable, Recession-Resistant Stocks to Avoid a “Crisis”