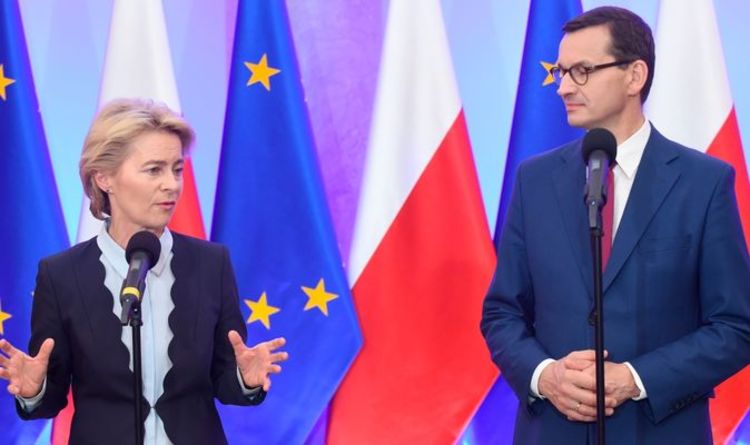 European Parliament Vice-President Katarina Barley issued a stern ultimatum to Poland and warned that it could be barred from receiving EU funds, including Covid bailout money, if Warsaw is moving away from European legislation. The outburst of anger, echoed by prominent politicians in Brussels, came after the Polish Constitutional Court ruled on Thursday that parts of EU law were incompatible with the Polish constitution.

The result could plunge the bloc into disarray as it risks undermining the rules governing the 27 EU member states.

Speaking to German newspaper Die Welt, Ms Barley said: “The Polish government has its constitutional court, which is occupied by political forces, certifies that it will no longer have to comply with European law in the future. “

The EU chief added that the Commission should “not give any European funds for the coronavirus to Warsaw and must also block other funding”.

Former EU Council President and Polish opposition leader Donald Tusk ordered a protest in the Polish capital later this afternoon to protect the foundations of the bloc.

He tweeted: “I call on all those who want to defend a European Poland to come to Palace Square in Warsaw on Sunday at 6 pm.

“Only together can we stop them.”

The Polish court took up the case after Prime Minister Mateusz Morawiecki asked it whether the EU institutions could prevent Warsaw from overhauling its judicial system.

Despite the intervention, the ruling nationalist party in Poland, Law and Justice, said it had no plans for a so-called “Polexit” of the European Union.

Poland has been a member of the bloc since 2004 and support for staying in the EU remains high across the country.

In a statement, the ministry said: “All obligations under EU primary and secondary law remain in force and will therefore continue to be fully respected by Poland.

“The provisions of the Treaty on European Union indicated in the judgment (…) remain in force.

“What cannot be accepted are only the forms of their interpretation or application that violate the constitution. “