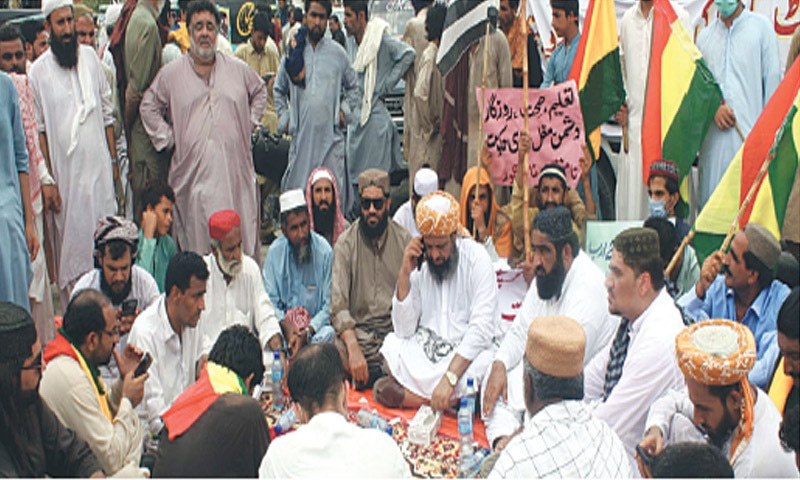 
QUETTA: National highways passing through many towns and villages in Balochistan, including Quetta, Chagai, Washuk, Kharan and Nushki, were blocked on Thursday by supporters of opposition parties to protest what they called the act of government to ignore their development plans proposed in the provincial budget due to be presented on Friday (today).

Opposition party leaders in the provincial assembly announced that they would also besiege the assembly building on Friday and would not allow any MPAs to enter the building and present the budget for 2021-2022 if their plans to proposed developments were not included in the Provincial Annual. Development Program (ADP).

Opposition leaders have continued their sit-in in front of the Balochistan Assembly for the past three days. “Our sit-in is going on 24 hours a day,” lawyer Malik Sikander said. Mr Sikander was leading the protest against the government for failing to give prominence to opposition development plans in the upcoming budget.

Meanwhile, Maulana Abdul Wasey, provincial emir of JUI-F and member of the National Assembly, at a press conference in the protest camp of the opposition parties, asked supporters of the opposition parties , members of civil society, traders and others gather outside the Balochistan Assembly on Friday to block the entry of government ministers and MPAs into its building.

He said: “We will not allow the government to present the budget which is prepared without consultation with the main opposition parties”, adding that their proposed development plans have been ignored in the next ADP.

Maulana Wasey called on the coalition government to postpone the budget for at least five days to make it a consensus budget.

Meanwhile, workers from opposition parties, including the National Party of Balochistan (BNP-Mengal), the Pakhtunkhwa Milli Awami Party (PkMAP) and the Jamiat Ulema-i-Islam (JUI-F), on the call of their parties, blocked the Quetta-Karachi national highway at Town Hub, Khuzdar, Kalat and Mastung and other highways at Pishin, Qila Abdullah, Loralai, Zhob, Nushki, Sibi, Dera Murad Jamali and Dera Allah Yar.

All types of traffic, including passenger coaches, trucks carrying Afghan transit goods and NATO supplies, remained suspended for at least seven hours. Hundreds of trucks, coaches, buses and other vehicles have been stranded at various points of entry and exit from Balochistan, causing great hardship for the population, including women, children and the elderly traveling in coaches by very hot weather.

Heavy contingents of security forces have been deployed to various locations on the highways by the administration of the various neighborhoods to avoid any unfortunate situation.

Protesters chanted slogans against the provincial government and alleged that unelected politicians were receiving funds and members of opposition provincial assemblies were ignored simply because they did not belong to the ruling party. They demanded equal funds for all districts of Balochistan.

Ali Raza Rind in Chagai also contributed to this report